I turned 46 yesterday and my parents have come to Cincinnati from Arkansas to spend the week.  My dad asked if there would be any “celebratory pork” made available during his visit.  “Of course” is always the right answer.  Per usual, my dad requested Baby Back Ribs, as they are tasty and have the shortest cook time; unfortunately, Whole Foods was out of ribs, so I got the biggest Pork Butt they had behind the counter, which was about 6 pounds.  I wish I had a local butcher that is convenient, but that isn’t in the cards.  I have found that Whole Foods gets their meats locally and they are very high quality.  This brings me to the very first, and possibly the most important, point on making a good Pulled Pork.

There is an argument that the point of slow smoking and associated extended cook times are supposed to convert poor cuts of meat into the delicacy we know as smoky BBQ.  This is true.  However, if the starting meat has a super high fat content or is old or is salt brined, you can’t fix that with smoking.  Also, the fattier the meat, the more you will feel robbed when you pull the pork out of the oven as it will appear that half of the meat has disappeared.  The meat isn’t gone.  The fat, that you also paid full price for, is gone.  As you will see later, the meat from Whole Foods doesn’t shrink nearly as much.

I can say without hesitation that my largest BBQ disappointments had their origins in my misconception that I could get any meat, anywhere, and make it taste good.  Better cuts of meat always make better BBQ.

While I’m thinking about how to set up for success in smoking pulled pork, let me talk a little about the heat and smoke source.  First, a don’t.  I don’t use Charcoal Briquettes.  Will they work in the Breeze?  Yes, absolutely.  They actually burn very uniformly and are very dense so you can put a much larger load of them in the self-feeding fuel chute.  The reason I don’t use them is two-fold.  First, the way a briquette is made is by taking a combination of charcoal products and compressing and gluing them together with a binder.  If there isn’t a binder, the briquettes would tend to fall apart.  Manufacturers of the briquettes may use natural binders, but nevertheless there is an additive which could provide a slight flavor difference particularly when you are subjecting the meat to 10 to 14 hours of cooking time.  Second, Charcoal Briquettes produce more ash.  I’m not sure why, but I know I have to empty the ash pan more often with Briquettes than with Lump Charcoal or Wood.

So what do I use?  First, the 8” diameter chute on the Breeze will handle just about any commercially available charcoal or wood source out there, so what you put down the chute is personal preference.  My comments above about Briquettes falls into that category… it’s my personal preference.  For Pulled Pork specifically, I use a lot more Hickory Wood than Charcoal as the meat can handle a very high level of smokiness and not become overwhelming.  This isn’t true for all meats.  Today I used Lump Charcoal and Hickory Wood chunks available at Lowes.  The Cowboy Brand works fine, but I do find it has highly irregular shapes, which I am not fond of as it doesn’t pack as densely in the fuel chute, but it works and is readily available, so I keep using it.   I also used Cowboy brand Hickory Wood Chunks.  Both are pictured here.  I’ll discuss the ratio of Charcoal/Wood later. 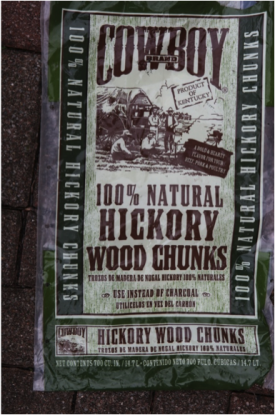 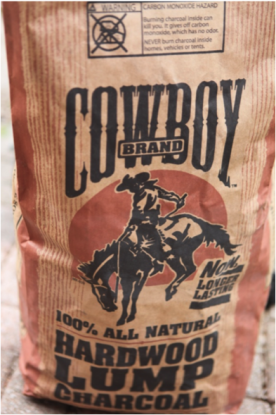 Now that I have the meat and wood and charcoal, I’m ready to cook, which is what I call the “easy part”.  The definition of “Easy BBQ” is highly individual.  Some say that it is easier to go pick up BBQ at a local store.  This is likely true, and generally I’ve found small owner-owned-and-operated establishments to be some of the best BBQ in the world.  So, I will never debate that point.  However, for those who want to cook BBQ on their own, for whatever their motivation, cooking on the Breeze is about as “set it and forget it” as it gets.

I’m a firm believer that you only add seasonings to enhance the natural flavor of the meat.  I’m not into using sauces for the meat preparation specifically.  If my guests want to use BBQ sauce due to their preference, I’m 100% ok with this, because BBQ is to be enjoyed the way each person wants to enjoy it, but as the cook, I find it a failure that I would have to rely on that.  As such, my Pork Butt preparation is quite simple:  2/3 salt, 1/3 pepper.  I spread mustard over the surface of the meat to get the salt and pepper to stick, but that is it.    I’ve added other spiced in the past, like onion and garlic and sage and paprika and mustard powder and sugar and (the list goes on and on).  At the end of the day, I can add all of that stuff after the meat is cooked and get exactly the same, if not better flavor.  Also, I could add the same seasonings in the form of BBQ sauce and get that same flavor.  Salt, on the other hand,  is an interesting seasoning in that it both enhances the flavor but also changes the chemistry of the cooking process. The picture below is a picture of the Pork Butt, covered in a light glaze of mustard, with a liberal amount of the Salt and Pepper blend I mentioned. 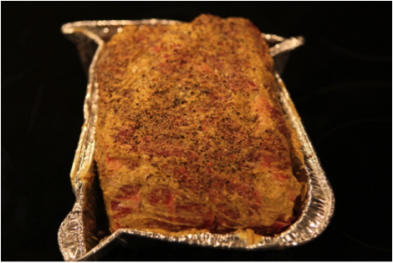 You will notice the meat is sitting in an Aluminum pan.  For many BBQ masters, this will receive a groan of disdain, but I do if for one major and one minor reason.  The major reason is that that aluminum creates a boundary so that when the fats from the meat render out, they stay in contact with the surface of the meat.  As the fat inside the meat wants to render out, this layer eliminates the impact of gravity and eliminates any concentration gradients where the oil wants to go to the outer surface because it is drier.  I have found that by using this approach, I have gotten the most consistent Pulled Pork.  The minor reason is that it is just easier to handle.  My whole purpose in creating the Breeze in the first place was to create an easy approach to BBQ that anyone, regardless of training or experience, could use and make perfect BBQ ever time.  This is just another layer of simplicity.  In 12 hours of cooking, I’ll only visit the smoker a total of 4 or 5 times, and this makes two of those times, namely putting the meat into the smoker and pulling the meat out of the smoker, easier.

I let the meat out of the refrigerator for 1 to 2 hours prior to putting it into the smoker.  The main reason I do this is to prevent the smoke from condensing on the outer surface of cold meat.  This does sound a little backwards, since I am putting the meat purposely in a smokey environement for 12 hours, however, I draw a line of distinction beween “gas phase” smoke and “condensed smoke.”  Condensed smoke has a very acrid and off putting flavor.   If the surface temperature of the meat is hotter, then the smoke doesn’t condense, but just floats around in it’s gas phase, so you get the the benefit of the smoke ring and the smokey flavor without the acrid notes.

On the website, I’ve covered how to light the unit, so I won’t belabor that here.  The only thing that I care about when cooking anything on the Breeze is setting the initial temperature.  The oven is fully insulated, the air moves through the oven with up and down convection, and the self feeding fuel chute will keep the heat input constant.   Once I get the initial temperature right, based on the type of meat I’m cooking and the amount of meat I’m cooking, I don’t have to adjust the temperature control damper again.

For Pork Butt, I target a temperature around 240-250F.  I’ve seen people cook as low as 220F and as high as 275F.   Each temperature will create a different meat texture and can make a dramatic difference in cook time.  I’ve found that I like how the Pork Butt tastes at 240F to 250F, so I’ve stuck with it.  Here are side by side pictures of the cooking temperature and the Pork Butt when I put it in the oven at 10PM at night and when I pulled it out at 10AM the next day.

As far as the Charcoal and Wood, I lit the unit using Charcoal, as Lump Charcoal is quite easy to light and it gets hot fast.  For the actual cooking, I used 100% Hickory chunks for the first 10 hours.  After that, I started using Lump Charcoal.

So I’ve given the before and after pictures above.  What happened in the 12 hours in between?  Mostly, I slept.  I put the meat on at 10PM with the temperature at 250F.  I watched American Idol for a while, then at 11:30 PM decided to go to bed.  I didn’t look at the meat or fuel.  I just went to bed.  I set my alarm to go off at 4AM so I could refuel the unit, as experience says that 4-6 hours is the typical range when I’m cooking with the damper in a low (20% open) position.  I overslept and woke up at 5AM.  I went outside, dumped a full bag of Hickory Chunks into the chute and went back to bed.  I didn’t adjust the damper or open the door.  In fact, you can see from the picture above that when I pulled the meat out of the oven 12 hours after I started, the temperature was still within a few degrees of the starting point.

As a former owner and user of an offset smoker, I had to train myself to not open the door of the oven while cooking.  It simply is not required in the way I cook.  I don’t have to move the meat around nor mop the meat as the tempeature stays very uniform.  There is always the  temptation to “just take a peek,” but there really is no reason.  As said, I just went back to bed.

At 10AM,  after 12 hours of smoking, I opened the door to check the meat.  I used a pair of tongs to grab the side of the meat and an elongated piece, shown to the right, easily pulled out.  It was done and ready to pull.

For the purposes of comparing the before-smoker and after-smoker product, I have a side by side comparison here.  You will notice very little shrinkage of the meat.  This is a sign of a higher quality Pork Butt.  Also, you will see what a nicely colored bark formed on the Butt.  If I wanted to have a really dark or crunchy bark, I would add some brown sugar so it would caramelize, but I haven’t found it necessary. 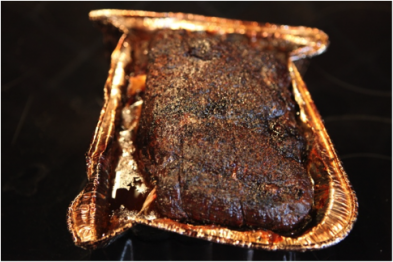 Finally, I’ll talk a little about the product that came out of the smoker.  In the pictures below, you will see the first reveal of the meat under the bark.  The meat was consistently tender, extremely tender, and had a nice red smoke ring throughout.  With the use of the aluminum pan, there could be some concern on whether the smoke ring would be deep or uniform, but as you can see it was throughout the whole Butt. 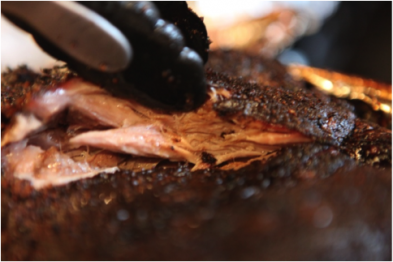 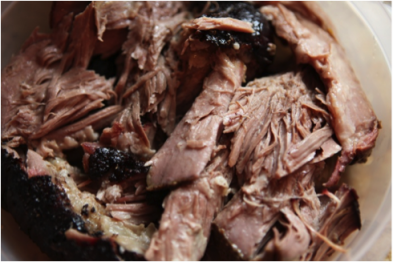 So what did my guests think? They loved it.  The biggest compliment was that my dad went back for seconds and thirds!

There you have it.  Pulled pork made easy.  Here are the key points I made throughout this post:

One thought on “Smoking the Perfect Pulled Pork – By the founder”